How long does it take for a MongoDB to be compromised

MongoDB, a popular NoSQL database, has been making news for years due to older improperly configured servers.  As far back as March of 2013 a researcher named David Kirkpatrick, with Trustwave, pointed out that MongoDB did not have authentication set by default, which meant anyone could connect to it and read and write data.  He also reported that it's default configuration was causing it to bind to every interface (0.0.0.0), which includes the public Internet interface. This combination placed tens of thousands of MongoDB servers at risk.

In July of 2015 John Matherly of Shodan announced that his scans had found nearly 30,000 open MongoDB databases available to the public on the Internet.  Many companies were caught by surprise with this and some high profile data compromises, some of which we reported, were the result.

In December of 2016 security researcher Victor Gevers, working with the just launched Project 366 with the GDI Foundation noticed something new.  While poking around open MongoDB instances he noticed many had simply one table named “WARNING”.

The content of this table was simply the Object ID, an email address ( harak1r1@sigaint.org), and a note that said “SEND 0.2 BTC TO THIS ADDRESS 13zaxGVjj9MNc2jyvDRhLyYpkCh323MsMq AND CONTACT THIS EMAIL WITH YOUR IP OF YOUR SERVER TO RECOVER YOUR DATABASE !”.

Ransomware had hit the open databases, or had it?

It certainly looks like ransomware, but it turns out that this was different. In this attack there was no data to be returned to the victim upon payment because the data had not been taken, it had just been deleted by dropping the databases. It was done by automation, what has been referred to as a “spray and pray” approach where any publicly open database detected is automatically compromised if possible.

Soon after the ransom warnings made news, other malicious individuals joined in the feeding frenzy, even replacing each other's warning messages and e-mail addresses for the bitcoin payment. This is still going on today.

How fast will they be compromised today?

We at Kromtech Security wondered how prevalent these attacks still were and how fast one of these improperly configured databases would be compromised today.  To find this out, we decided to employ a honeypot or fake database setup.  A honeypot looks real to the attackers and but allows us to monitor it and see what they do as well as quickly reset it once it is compromised. 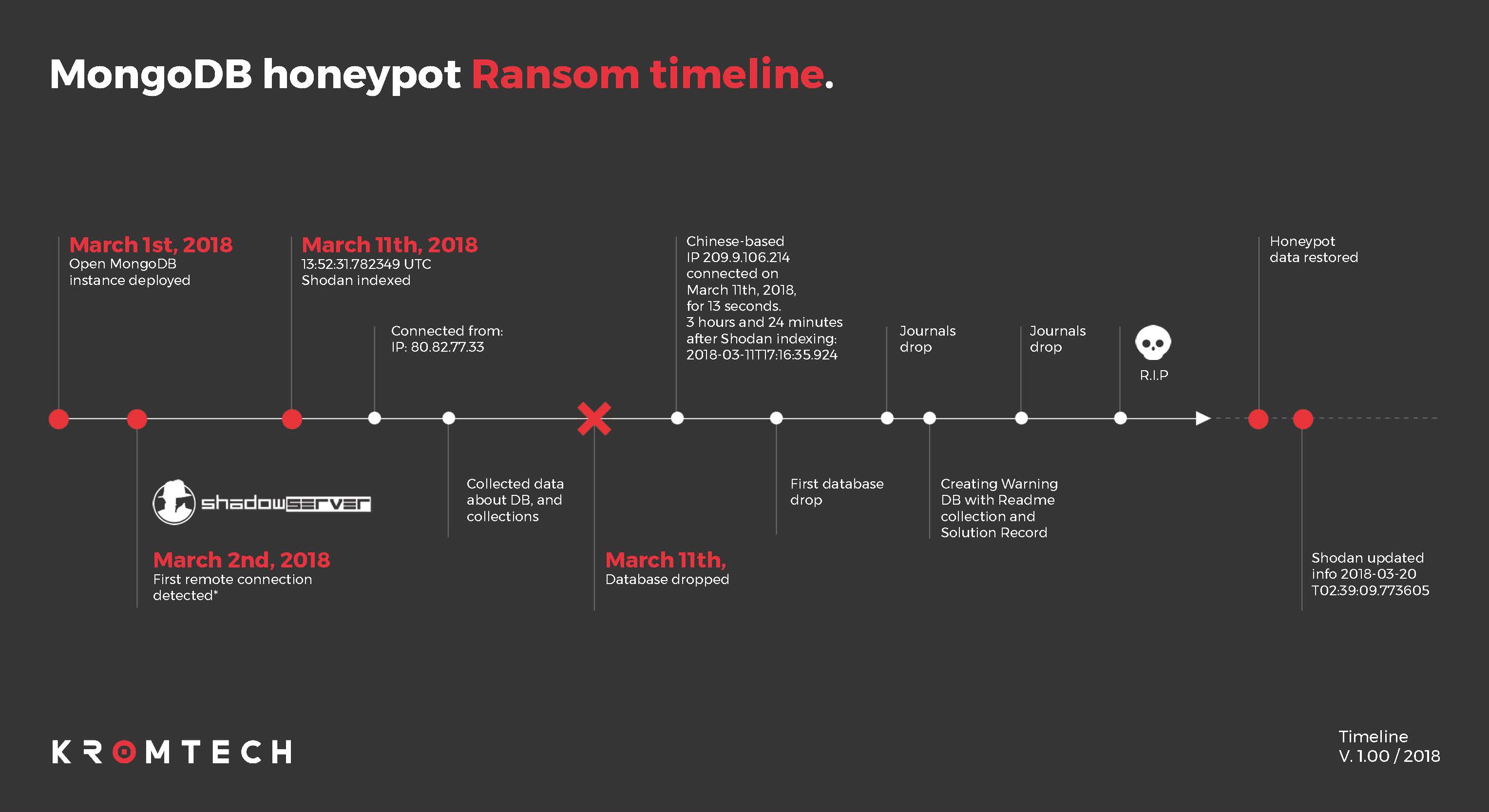 We placed the server live on March 1, 2018.  What resulted was as expected (spoiler alert, the database was compromised).  Immediately upon placing it on the Internet we noticed the regular flurry of automated port scans from many different parts of the globe.  However, the first real connection to the database was made on March 2, 2018 and from a security research search engine from the Shadowserver Foundation.

What came next was a slight surprise, there were plenty of port scans, but there were no other direct connections to the database for ten days.

The next direct connection came from the security research search engine Shodan.  Shodan indexed it on March 11th, 2018, 13:52:31.782349 UTC and retrieved data about the database and it's collections.

Three hours and twenty-four minutes following Shodan indexing, the database was first compromised by an IP address we traced to China.

After the compromise we were left with just the following warning:

Thankfully, nobody has made payment to this Bitcoin address according to blockchain.info

What did we learn?

You are going to lose your data if you don't properly secure your server.  That stands true with all, but here there really is no excuse for this to still be happening with MongoDB.  Issues with MongoDB have been known since at least March of 2013 and have been widely reported since.  The company has updated it's software with secure defaults and has released security guidelines.  It's been five years now and these unsecured databases are still widely available on the Internet, almost 54,000 of them now, according to Shodan.  We find this unacceptable and hope that our honeypot test sheds even more light on this issue.

Logs for 13 seconds of ransom attack

Parts of logs can be used as a ruleset basis for detecting those attacks attempts. 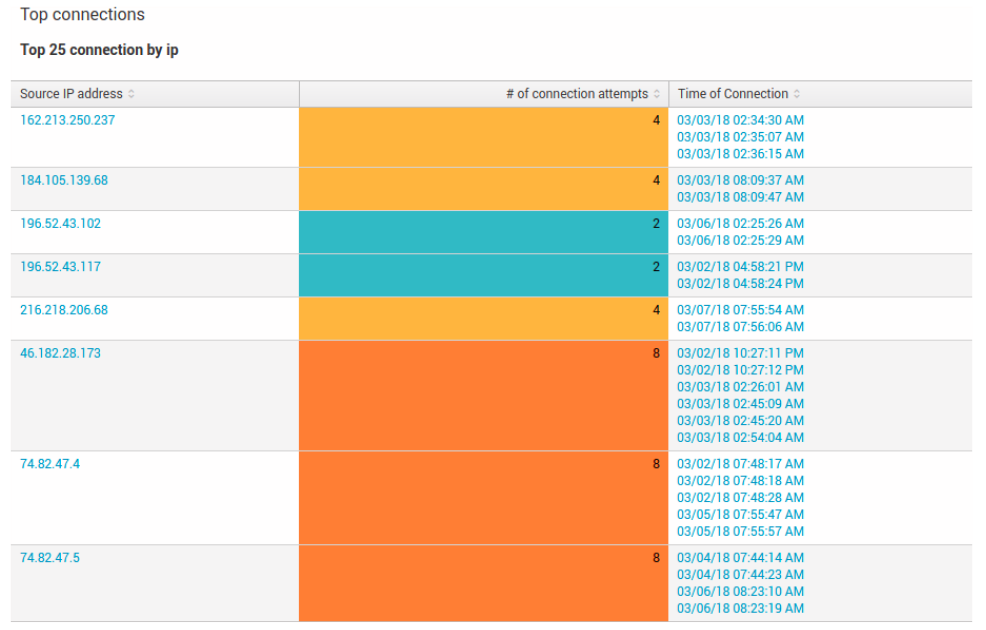 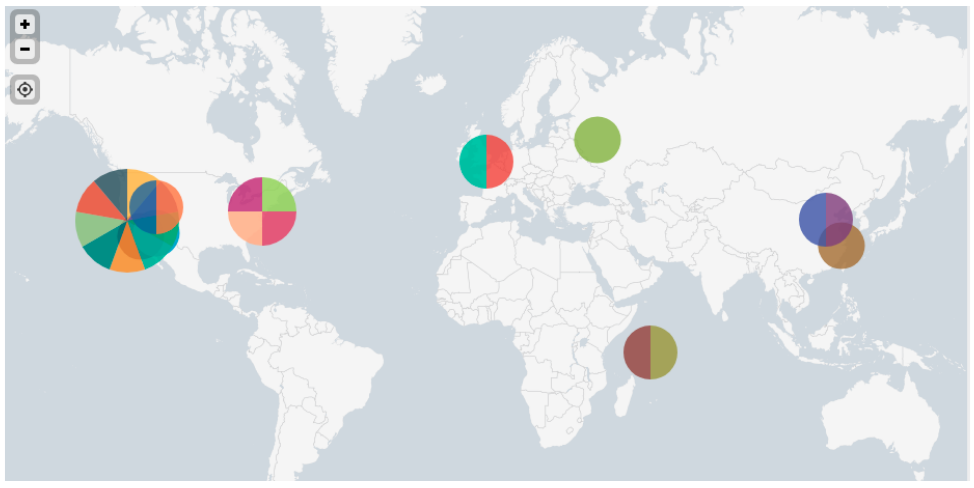 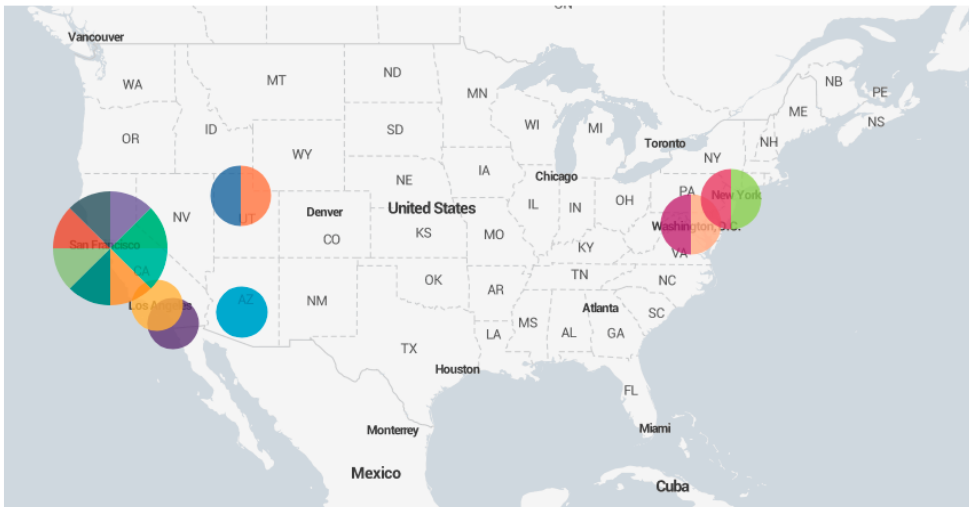 Attention - Portions of this article may be used for publication if properly referenced and credit is given to Kromtech Security Center.
Do you have security tips or suggestions? Contact: security@kromtech.com